Having spent two posts discussing video games, I thought it was time for me to discuss something I enjoy even more: a tabletop roleplaying game. 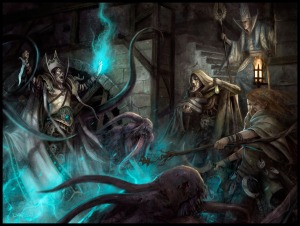 Games Workshop. Although the roleplaying game is set in the very same universe, it is nonetheless quite different in tone. When you look at the army books and miniatures for the wargame, you’ll probably get the vibe rather quickly: an over the top, megadark world full of bloated monsters that consist mostly of teeth, offset by garish elves in golden armour astride mighty griffons. It’s a grim, violent spin on high fantasy. The roleplaying game, by contrast, gives the world a rather subdued, more mysterious feel that actually contrasts quite a bit with the wargame. This is a grim perversion of central Europe in the 15th century, focusing on a vast Empire clearly based on the historical Holy Roman Empire (currently Germany). Being a British game, it comes as no surprise that there is also a quirky sense of humour underlying the otherwise bleak tone of the setting. Inhabitants and locations in the Empire bear German names that often have funny or ironic translations and the fascination with beer and sausages is nothing short of parody. Nevertheless, I said it was grim and trust me, it really is. There is a force at work in this world called Chaos. It represents human frailty and the entropy that comes from our own self-destructive nature. Personified by four Chaos gods, the “Ruinous Powers” (as Chaos is often called) seek to bring down all civilization only to replace it with neverending brutality, decadence, disease and pure mind-altering weirdness. Because this evil seems to be a dark part of the nature of man itself, manifesting in the real world in incomprehensible ways, the question of whether it can ever be truly defeated is really the question of whether or not man can ever overcome his own aggressive and indulgent nature. There are quite a bit of provocative philosophical musings underlying this fantasy world. The writers have worked hard to create a world no sane person would ever want to live in, while still leaving some room for that desperately needed ray of light. Everything may go to hell but there is a slight chance that it won’t. That is the perpetual state of the grim and crazy Warhammer world.

The third edition of this game has been somewhat controversial because it broke with a long tradition of roleplaying games being presented as nothing more than books. If you want to actually play most RPGs, you have to buy not only the book(s) but also the dice, separately. Characters sheets usually have to be printed from the developer’s website or photocopied from the book. This has been the customary approach for years now and I think there’s nothing wrong with questioning that for a moment. I think I prefer buying a game over buying a book that tells you how to play a game, although I do understand why others prefer the more traditional approach. This core game, however, comes in the form of a big, juicy box that invitingly smells like “new game”. It includes four books of about 100 pages each, tons of cards and chits, a pad of character sheets, a set of custom dice and lots of other little bits. All of this material is of the highest quality and covered with amazing artwork that really sets the tone of the world very effectively.

The game plays as a shared storytelling experience, rather than a tactical combat game propelled by a story. I personally enjoy both playstyles, but the latter screams “D&D 4th Edition” whereas the former suits Warhammer Fantasy Roleplay a little bit better. Rather than rolling numbered dice, the players and the gamemaster roll symbolic dice to resolve actions during the game. The symbols on the dice represent abstractions such as “success”, “positive side effect”, “negative side effect” and the like. To see whether a character succeeds at an intended action, a player rolls a number of dice and together with the gamemaster, interprets the results. I find that this interpretation is one of the fun, creative aspects of Warhammer that really move the storytelling in unexpected directions and provoke flashes of inspiration in everyone involved. It works so well it’s actually a good tool to exercise creative writing, forcing improvisation in small doses, thereby challenging everyone at the table to create a more memorable story.

As in most RPGs, combat feels a bit more “game-y” here than all the rest. Players use combat cards that function quite similarly to the powers in D&D 4th Edition. They represent certain spells, attack styles or prayers to divine entities (divine spells, in other words). They also list what dice results are required for them to succeed and how certain symbols that might come up trigger all kinds of positive and negative side effects. What I find very cool about these cards is the fact that they have two sides: a green one and a red one. Throughout the game, players can change their character’s “stance” from green to red and vice versa. Green represents a cautious, conservative approach whereas red stands for a reckless, high risk/high reward way of dealing with things. This is one of the many ways in which the rules support characterisation and roleplaying, forcing players to think about “what their character will do” without pushing them too much into a certain roleplaying style based on mechanical imbalances. Of course, it makes a lot more sense for a Dwarf Troll Slayer to charge heedlessly into the fray than to carefully examine his chances of success. That’s why characters receive red and green tokens that represent just how far into the reckless or conservative stances they can go. A priestess of Shallya, the goddess of healing and childbirth, will obviously receive more green tokens than the aforementioned Troll Slayer.

The core box for Warhammer Fantasy Roleplay comes with an excellent pre-written adventure that does a great job of representing the tone of the world and the type of adventures you’ll be having. It consists of more investigation and roleplaying than combat, although the latter is far from absent as well.

I did find that the core set was a bit lacking in terms of explaining more about the lore of the world, focusing very much on the rules. I already knew quite a bit about the world, having played the previous edition, but for newcomers it’s just not enough. Luckily, there have been lots of expansions since the game’s original release, including a number of adventures that will keep you going for a while. Nevertheless, the core box is not cheap. Be sure you want to play this before purchasing it. Personally, I recommend it to everyone looking for an atmospheric, grim fantasy world and an open-minded, creative rules system.